Home » 7 Signs Your Date Might Be Lying To You

According to Gulf News, the average person lies at least once every ten minutes. A date can last anywhere from an hour to an entire twenty-four. Within that period, it’s possible for your date to have lied to you dozens of times.

Dating is already hard enough as it is. You have to deal with the sleazes, the dumb ones, the narcissists, the show-offs, and more. Nowadays, it seems like there isn’t a single normal person available, and having to deal with liars plus a person’s natural weirdness is a little too much. Trust is an essential part of any relationship, and you need to know if your date is a liar before you commit to anything.

7 Signs Your Date Could Be Lying To You

To help you detect any suspicious behavior from your date, we’ve compiled the most common signs that your date has been lying to you. We advise that you keep a notepad beside you to check signs as they apply to your partner – just maybe don’t do it in front of them!

They Are Always Contradicting Themselves

Lying is pretty hard on the memory. Liars have to remember little details about the stories they’ve told so that their lies can remain consistent. But even the best liars slip up once in a while, and if you’re paying close attention to their words and the details in their stories, you may be able to catch inconsistencies and holes in their words.

If you feel like you’ve caught an inconsistency in one story, you should do your best to remember it and ask your partner to repeat the story at a later date. Take note of what they say and see if it matches the detail they spoke of last time.

If it does, continue looking for opportunities to bring up this story and ask them to fill in that detail. You’ll have to do this infrequently, of course, as naturally as possible so that you don’t raise their suspicions.

If the information continues to change and the details remain consistent, then you’ll know that they’re lying. And when we say inconsistent, we don’t mean when they’re hesitant about details of old memories once in a while because that can happen to anyone. We mean constantly changing small details within their stories or agreeing with you when changing details within their stories.

A conversation to find such inconsistencies can look like this:

You: “Hey, didn’t you say you went paintballing with your friends last weekend?”

You: “Did you guys go to Starbucks before or after that?”

That’s how you catch an inconsistency. Once there’s one inconsistency, you might find yourself catching more and more.

They Always Have An Excuse Ready

We all make mistakes. One of the marks of a responsible person is accepting your faults and making efforts to correct them. However, if you’ve noticed that your partner always has an excuse to deflect blame, you should be a little suspicious.

Liars have prepped excuses and alibis to exonerate themselves from any suspicion or blame. They might also attempt to shift the blame to anyone else, including you.

Sometimes, they do it so smoothly and have covered up their tracks so well that you may find it hard to spot even a single unnecessary or untrue excuse. However, the existence of too many mistakes, such as missed dates, missed calls, missed events, etc., that are followed by excuses is a problem in itself. Some liars even buy gifts to distract your attention from their lies.

If you have noticed that your partner dishes out one too many excuses, try verifying their reasons. Often, this will lead to an exposure of their lies because they cannot keep up with their own changing stories.

While most people do lie at some point during their lives, they aren’t chronic liars. To be a perfect liar, you must have lots of experience and a fantastic memory. But too few people have that, which is why so many are caught in their lies. We’re betting your date is part of the greater, normal majority.

However, it is normal to have some gaps when recalling long-past memories and details. Unless there was an extreme emotion related to the scene, most of us hesitate when telling stories that haven’t been brought up for a long time. We might even recall things wrongly simply because it was too long ago to remember the details of that event.

This happens because our brain needs to forget information it deems irrelevant to make space for what’s happening now. That’s the reason why you’re most likely not going to remember the name of this article in weeks, but you might remember snippets about the contents because that’s what was deemed important. Oh, but now that we pointed it out, you’ll probably remember the title for a good long while.

The point is, most people need to take some time to remember past events. It’s not uncommon to get unnecessary details wrong because the memory is so old that the brain might make up something that’s not there to take up the space of the discarded memory.

However, if your date seems to be able to remember the names of all his high school teachers but can’t remember what you ate, the last time you guys were together, there’s a good chance that they might be lying. The problem here is to ascertain what for. Why are they lying? Is it to impress you or to fool you?

Their Body Language Is Off 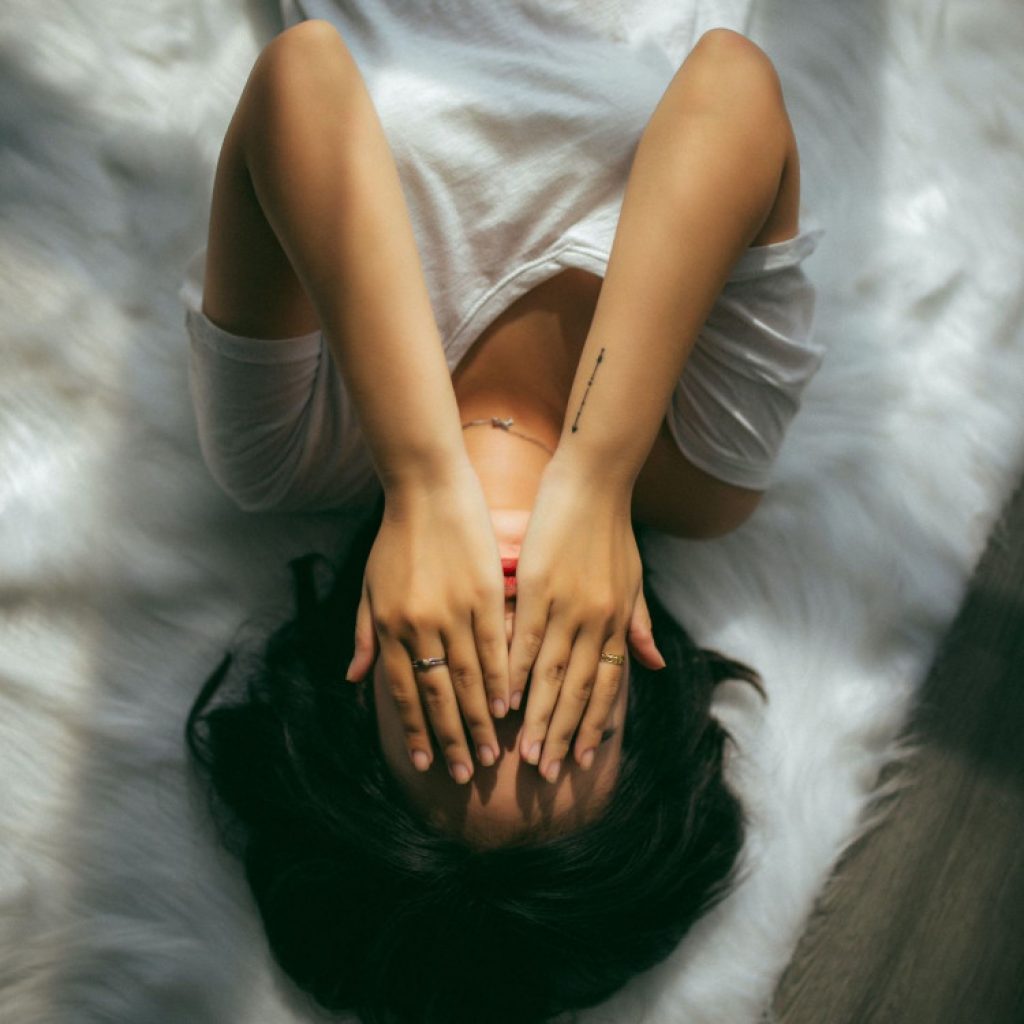 A person’s mouth may be lying, but often their body language gives them away. There are clues in posture, eye contact, fidgeting, and more. If you’re well-versed in the art of lie-detecting through body language, you’ll possess a new power to strip your present and future dates of their armor of lies. Here’s a couple of behaviors commonly seen in liars that can help you detect one.

While these aren’t all the body language indicators for liars, you can compare your date’s behavior to those listed above and see for yourself.

They Tell Too Little. Or Too Much.

When you’re in the first stages of dating someone, you’re still getting to know each other. This means that they should be pretty eager to share information about themselves to get personal with you. They may even overshare once in a while, but it should all be good fun.

But if you notice that your date is very focused on you, that is, if your date constantly redirects the focus back to you and answers questions vaguely and without much detail or interest, that can be a sign that a person is lying.

Think about it. Does your date ever get into details with you about what he does, his family life, his work, his hobbies, his pets, or his passions? Do they ever get excited and describe something fully? Or do you always have to pick and pry to get a few more words about each topic?

On the other hand, if your date talks exaggeratedly about himself and blathers on and on about their things, they may not be as buoyant as you think they are. Likewise, if they find a way to casually bring their wealth and achievements into every conversation and give unnecessary details, that’s also a red flag.

Why is not talking enough a problem, and talking too much also a problem?

Because being vague about details can show a lack of information which can be a way to keep you from learning the truth or a need to hide details to assuage guilt. Oversharing can hint at a need to compensate by making things or a nervous tic of talking too much. Don’t worry; the right balance won’t leave you suspicious.

They Over-Emphasize Details and Repeat Stories

We all love people who can remember small things about us like our favorite foods, places, things we randomly mentioned in conversation, etc. But what about when your date seems to remember almost everything? As in, nearly every little detail about any event they’ve lived through?

You’ll agree that this is almost physically impossible and is a skill that only 0.000001% of the population possesses. And while we’re not disputing that your date might be one of these few gifted people, we seriously doubt it.

To test both their memory and interest in you, you can ask them a question about your most recent date. Something about what you wore or what you ate at that time: if they don’t remember, you can cancel out the chance of them having a super photographic memory.

In the same vein, liars might repeat one story over and over again. This could be an attempt to turn the lie into truth by way of repetition. Sort of like the way that everyone still believes that Einstein failed math when he was a kid because it’s been said so many times.

To confirm your theory, watch out for the emphasis and repetition and ask questions. If your date can’t answer with certainty, then they may not be sharing the whole story.

You’ve Caught Them Lying Before

If this is true, then you already have a basis for your gut feeling. If you’ve caught them lying once or twice, then you know that there’s a chance that they could lie once again. And what if there are lies that you haven’t found out yet?

You’ve caught them in a lie once before, and now your gut’s tingling once again. But you can’t go with just that. Instead, you might want to look for some evidence to confirm your feelings. Either way, you have to realize that you probably shouldn’t continue a relationship with someone you can’t trust.

Apart from the signs above, if your date’s acting fishy and your gut tells you that something isn’t right, you’re probably justified in wanting to confirm your claims. Trust is an essential quality in any relationship. Once your partner breaks that, you’re going to find it hard to maintain that relationship. Trust in yourself and your gut and try to catch the lies when your relationship is young.

It may still hurt, but at least you won’t love a liar.