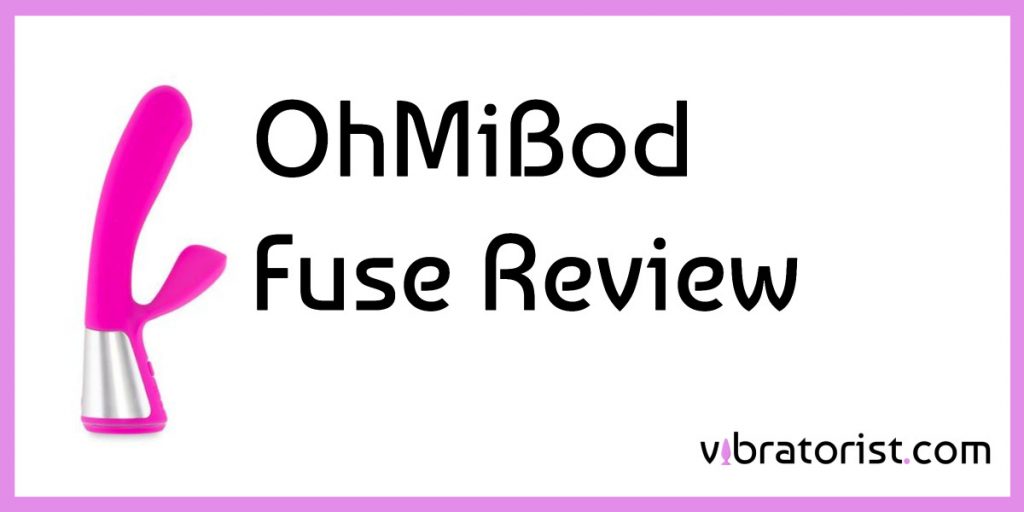 At this point, we all have very high standards for our sex toys. We want them made with certain materials, shapes, sizes, and features. Now sex toys tech has evolved even to make connections with VR headsets.

So we decided to test this toy ourselves to determine if it’s worth the hype. We thoroughly checked out this toy, looking closely at everything related to it. I tried it on myself numerous times just to be thorough, and now I’m going to share everything I’ve learned about the OhMiBod Fuse over the last couple of weeks.

By the end of this review, we’re pretty sure you’ll be able to figure out if the Fuse is a wise purchase or not. So let’s get into to our full OhMiBod Fuse review.

OhMiBod Fuse – In The Box 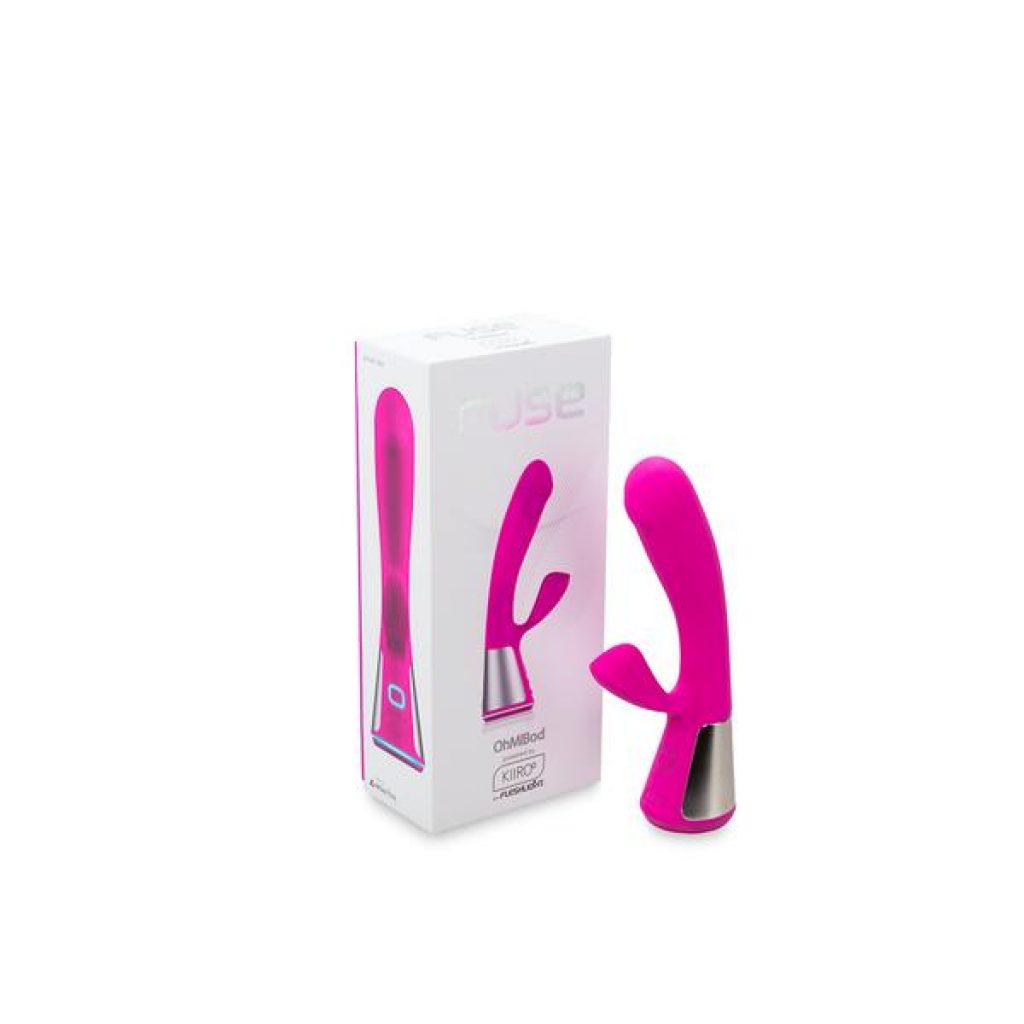 We want to start at the very beginning, from the moment we received the box. We were more than a little excited after reading the excellent reviews on the OhMiBod website, so we made sure to hold the little box gently but couldn’t help but notice that it was pretty light.

That made more sense when we opened the box. It only contained the OhMiBod Fuse and its USB charging cable, each laying in a space cut out for them. Underneath the foam, there was an instruction manual and a drawstring bag which is pretty ideal for travel. This was a little disappointing because we were expecting a lot more for a toy that costs well over a hundred dollars.

The other head is much smaller and is very flexible, and a little soft. You can tell that it was made to provide clitoral stimulation while the other end rubs up inside you.

The Fuse differs from many other rabbit vines by having the ability to stand on its own and vaguely resemble a pretty decoration. However, it doesn’t have a lot of other unique features appearance-wise. It’s a normal-sized vibe at around seven inches in length for the longer shaft and two inches shorter when measuring from the top. But it’s only a little over an inch wide or 1.3 inches wide at the largest insertion point. 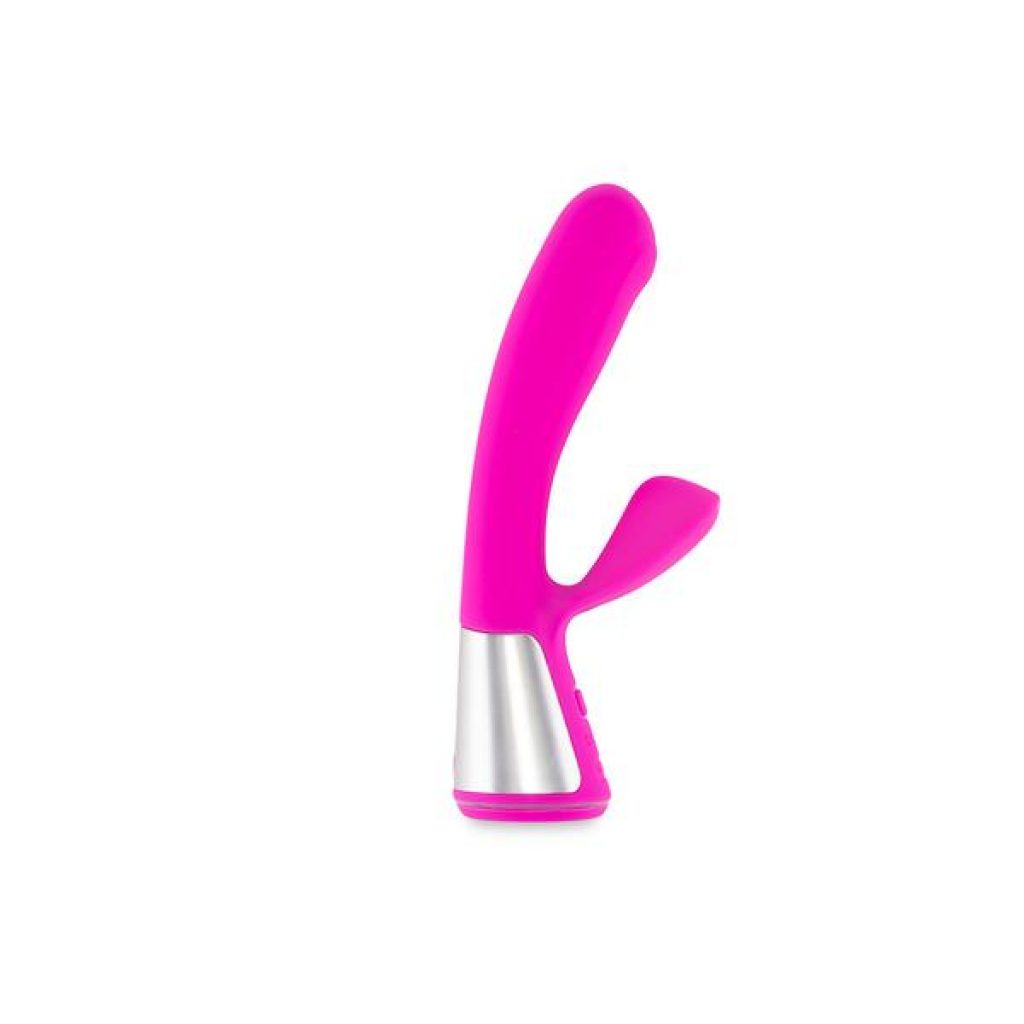 While it looks like a typical rabbit vibe, this toy has a lot of great features. One of them, is its touch sensitivity. Touch sensitivity means that the OhMiBod Fuse can detect how far you’ve inserted it. That is, it can tell how much of the toy is inside you and adjusts its intensity accordingly to maximize its orgasm-making power.

Touch sensitivity mode is enabled because of the sensors placed within the OhMiBod Fuse. The Fuse picks up enough data with its sensors to be able to tell when it’s been inserted or if it’s still being held. The more you have inside you, the more intense the vibrations and vice versa.

While this toy does have excellent capabilities, it’s a little annoying not to realize that the OhMiBod Fuse was designed to let only one motor make enough vibrations for two points. Unfortunately, this means that the clitoral stimulator doesn’t vibrate as it should.

While this doesn’t take away from the longer shaft’s vibrations, it diminishes the potential of the clitoral stimulator. The clitoris is one of the few common erogenous zones shared by most women and is way more effective than the G-Spot. So, ignoring it in this way seems a bit sloppy.

It’s also not completely water-resistant. You absolutely should not take this toy under the shower with you. It’s only splashproof, which means it can take some accidental spillage and still work fine, but sitting in water will kill it.

From the last few paragraphs of the above subheading, you might assume that this OhMiBod Fuse has weak vibrations. Well, you’d be wrong.

Because the Fuse is a double stimulation toy with only one motor, it needs to be strong enough to generate vibes for both shafts. The majority of the vibrations are concentrated on the G-Spot stimulator. And, although the vibrations of the clitoral arm are much weaker, they still add some extra stimulation.

Where the power of the OhMiBod Fuse truly shines is in manual mode when you can choose exactly what type of vibe you want and the intensity. We have tried a lot of sex toys. We know potent vibrations, and we can handle them.

But we can tell you that this toy made us forget we needed to take note of the experience to review this toy. We even had to go for another round to slow down and take note of everything.

You can easily change patterns and modes through one button at the base of the toy or through the OhMiBod or Feel Connect app if you want. Either of these apps will allow you the freedom of choosing your vibration mode and intensity out of the available pre-set patterns. This way, you can create better orgasms for yourself.

Being teledildonic, the OhMiBod Fuse has more capability of connecting to various devices. There are many ways to pleasure yourself with this toy, and connecting to it through Bluetooth is only a small part of this toy’s connectivity. 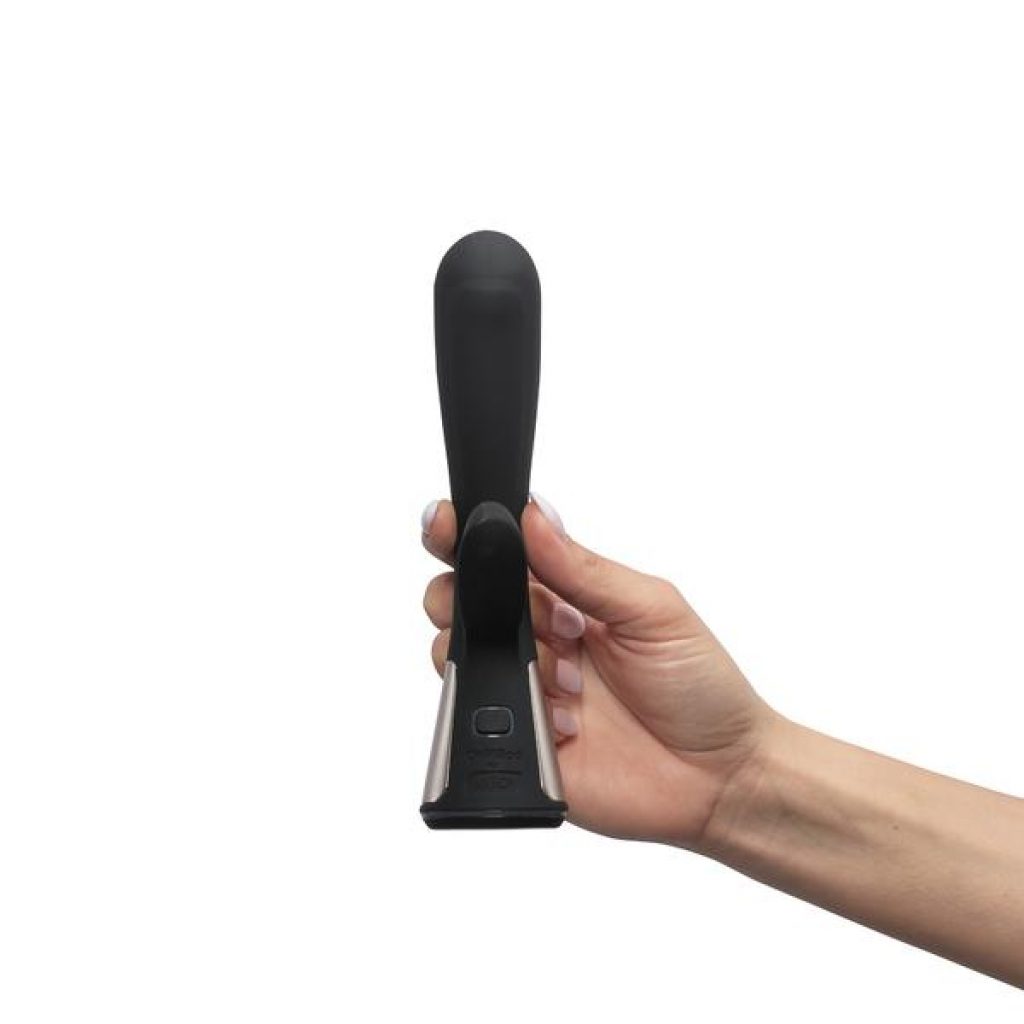 You can switch on the OhMiBod Fuse, and it automatically goes to Bluetooth mode. Here, you can connect to it and control it using either the OhMiBod app or the Feel Connect app. Although both apps can control this toy, the OhMiBod app does have a better interface, so it’s often the preferred application.

Connecting to the app only requires you to download the OhMiBod app, which is available on the Apple Store and Play Store. Then, you’ll need to turn on the OhMiBod Fuse and allow it to enter Bluetooth mode; You can easily find it within the app and connect.

If your partner also has the app, you’ll be able to share controls with them and let them tease you.

You can still connect to other toys within the app. That is, you can sync your OhMiBod Fuse with any other toy made by Kiiroo and equipped with FeelTechnology such as the Fleshlight Launch, the Onyx 2, the Pearl 2, and more. Syncing two toys will allow them to work at the same intensity and speed, which means you too can feel exactly what your partner is feeling.

This was an incredible experience for my partner and me, especially since the OhMiBod app allows you to communicate through chat. At some point, we had to use our laptops to FaceTime each other, so we could see each other’s expressions.

We went from trying the long-distance control to syncing another Kiiroo toy, the Kiiroo Keon. So all you need to know is that I learned that I might not be able to take some of the vibes that my baby can.

The OhMiBod Fuse needs about an hour and thirty minutes to two hours to charge if it’s completely dead. However, you only get an hour’s runtime when it’s full. While this isn’t a bad ratio by any means, it’s a bit too small for a toy that’s meant to be used by people in long-distance relationships. During playtime with your far-away partner, you’ll want some more time, and the Fuse’s battery life is too short for that.

There’s also the fact that using a higher speed and intensity level can deplete the battery faster. However, you won’t be caught unaware when the battery dies. The LED light on the OhMiBod Fuse, the same one that lights up when you turn on the device, will glow a bright red when the battery is low. It’ll also shine white when it’s full and needs to be unplugged.

This way, you’ll always know where your battery level is before you start using the OhMiBod Fuse, so you can avoid the toy shutting off while you’re chasing your orgasm.

While this toy isn’t something you can categorize as small, it’s not large either. So it was mildly surprising when it emitted sounds that were loud enough to fit larger toys. However, it’s not terribly loud, and some louder music can easily cover it.

You will need to take care of it whilst traveling to ensure that it doesn’t start up on its own while you’re in transit and make a sound that you can’t hide.

How To Use The OhMiBod Fuse 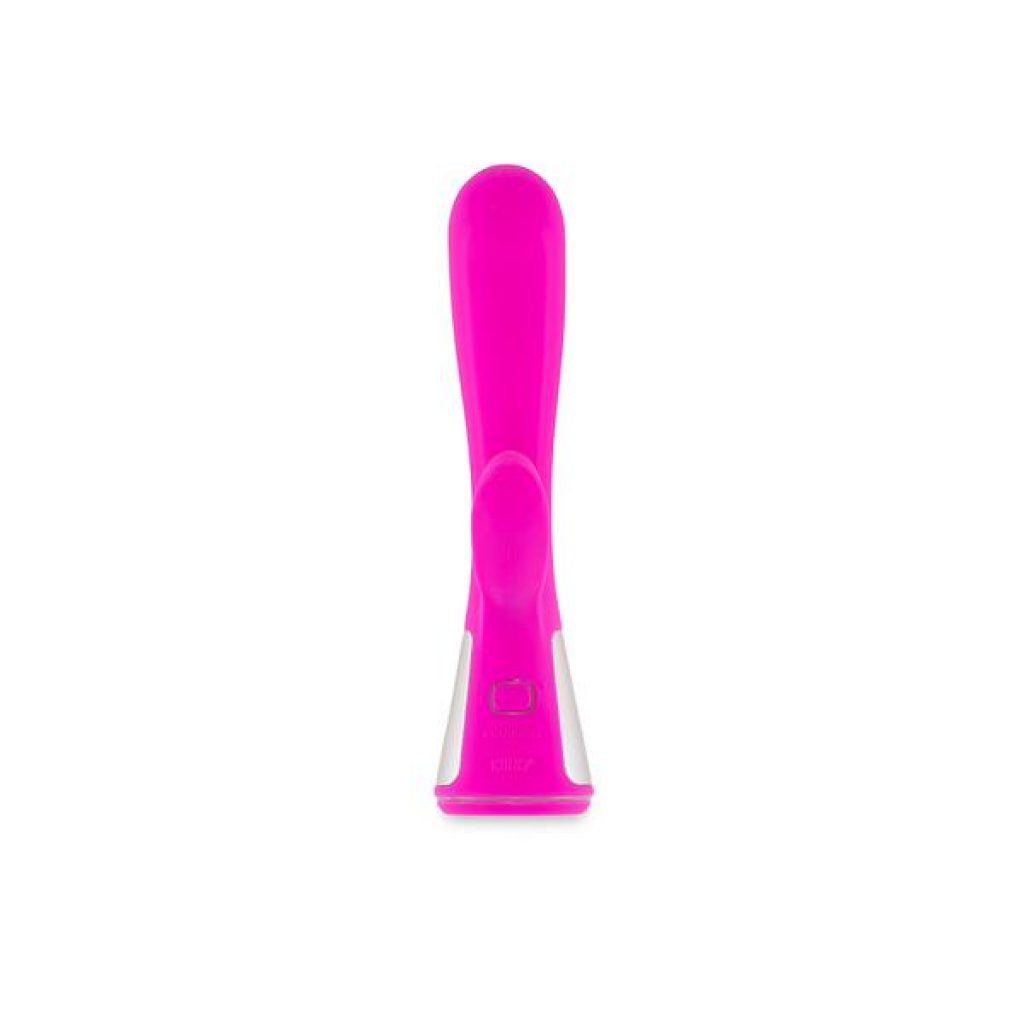 To turn on the OhMiBod Fuse, you only need to hold down the power button for two or three seconds. After that, there are three ways that you can use the OhMiBod Fuse. Or it’s more accurate to say that this toy has three modes. Bluetooth, Touch Sensitive and Manual Mode.

Bluetooth Mode -This mode requires the use of either the Feel Connect app or the OhMiBod app to work. You can easily download it either from the Apple App Store or Google Play Store. Then, you can sync the device within the app and start using it.

The LED light will indicate that the toy is in Bluetooth mode, with a blue light.

Manual Mode – You can get to manual mode with one more press of the button. The LED light will remain light blue. From there, use the seven pre-set vibration levels to drive yourself to your happy ending.

Pros And Cons Of The OhMiBod Fuse

The OhMiBod Fuse might just be the best teledildonic toy we’ve tried. Its vibrations are strong, and there are several features that we don’t think we’ll get tired of for a good, long time. Sure, there are minor hiccups here and there, but overall, we believe it’s worth every cent.