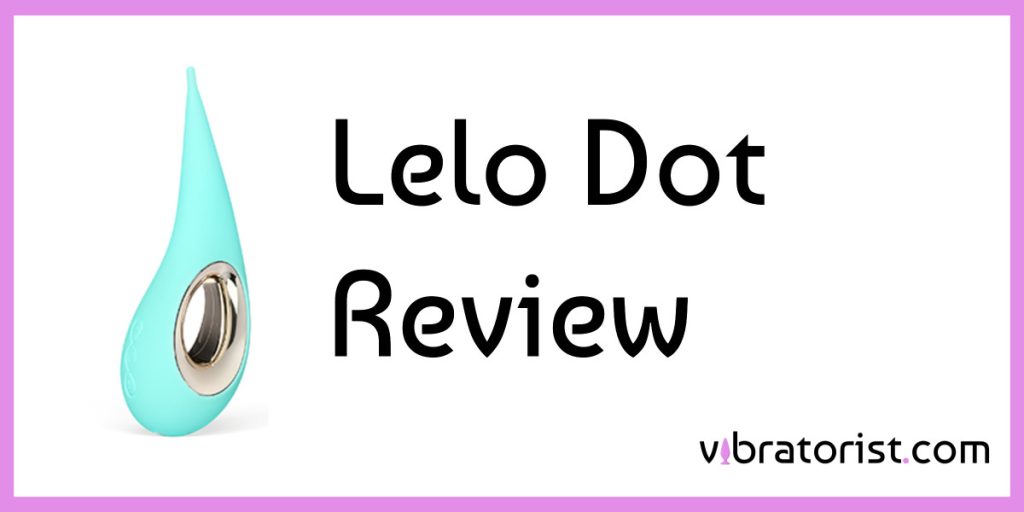 Lelo is one of the most innovative sex toy manufacturers in the world and with the Lelo Dot they have again brought something to market that has not really been seen before – at least it’s a new concept to us – and we’ve seen and tested a lot of toys. 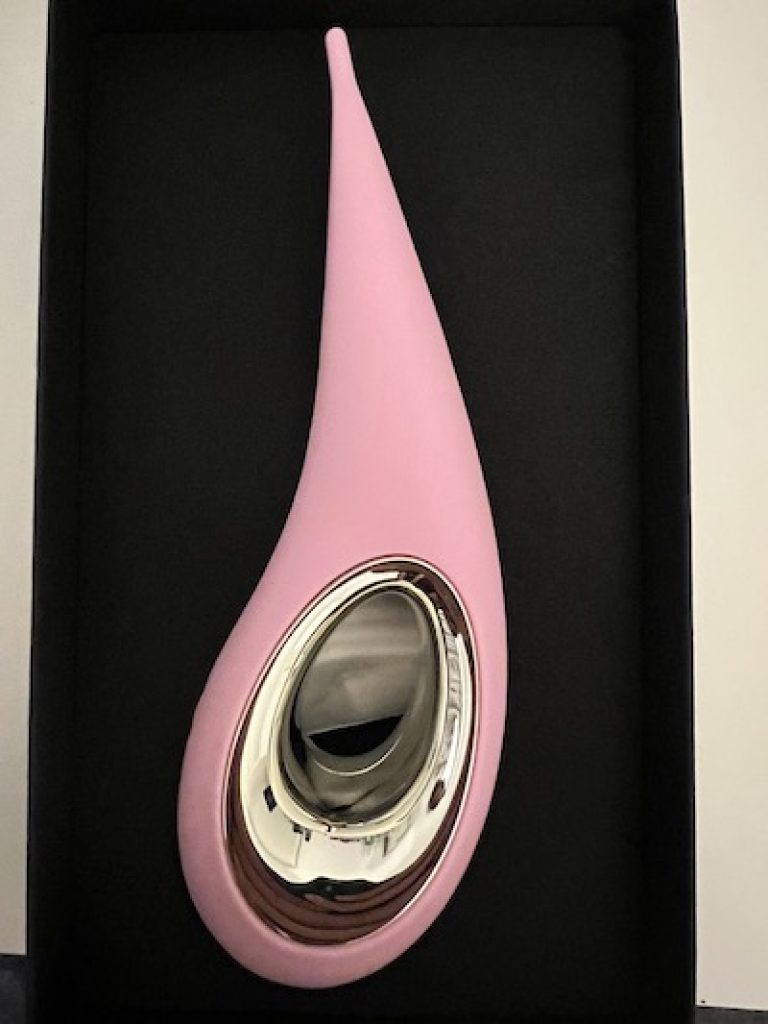 Lelo have really been at the forefront of sex toy technology and with so much of their focus in recent years on connectivity and especially long distance control, it’s pretty refreshing to see them turning their innovative hands to a more intimate device – one that can be used solo or as part of sexual intercourse (more on that later).

The whole concept and indeed the way it’s used is built around its tip – with it being used to target sensitive areas (for most this will be the clitoris, but it can be used for any erogenous zones – think nipples, neck etc).

The Dot comes in three colors (aqua, lilac and pink) and comes packaged with the USB charing cable, some lube and a discreet satin storage bag.

It is also 100% waterproof and has a long lasting charge. It only takes around 2 hours to reach a full charge from flat which makes it an ideal toy for bringing you pleasure when you might not have been planning it.

Lelo Dot – How It Works 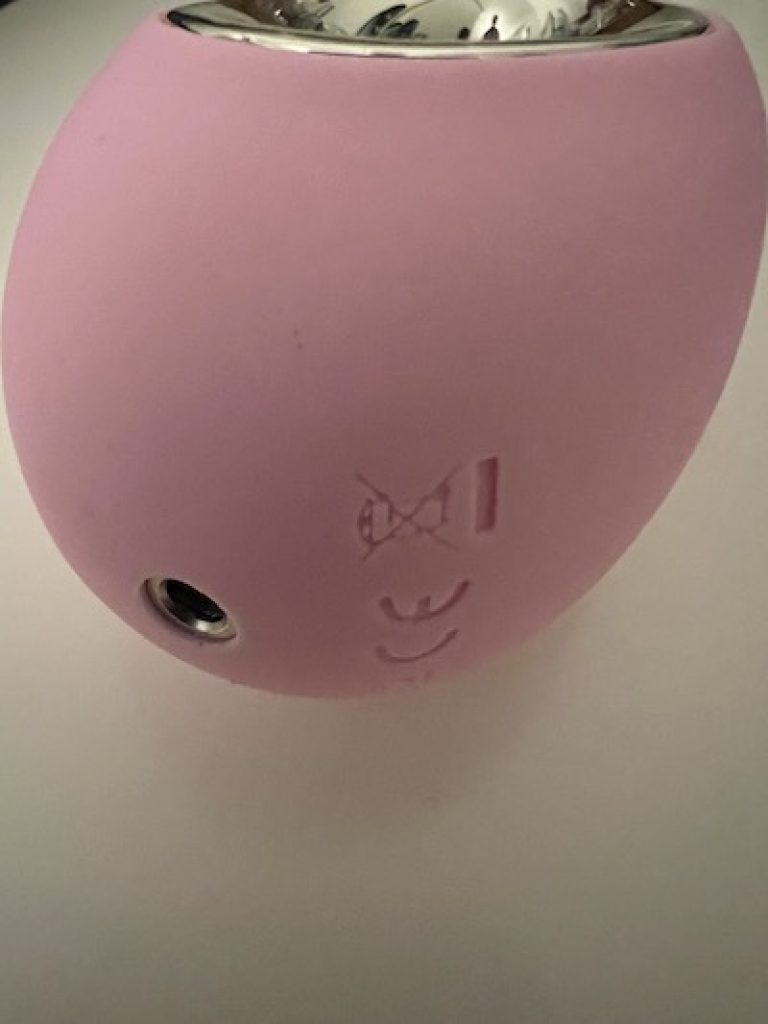 The 8 settings offer a good degree of range, with Lelo describing these as starting at a ‘teasing murmur’ and moving up to a ‘satisfying pulse’. This is a good way to describe the range of the 8 settings with essentially each one becoming a little more intense as you move from 1 to 8.

Lelo describe this as ‘infinite loop’ technology and if you think about the symbol for infinity you will get the idea of the patterns the Lelo Dot offers.

In addition to the tip offering these oscillations, it is also bendable so it can be manipulated in to the perfect position.

My Experience With The Lelo Dot 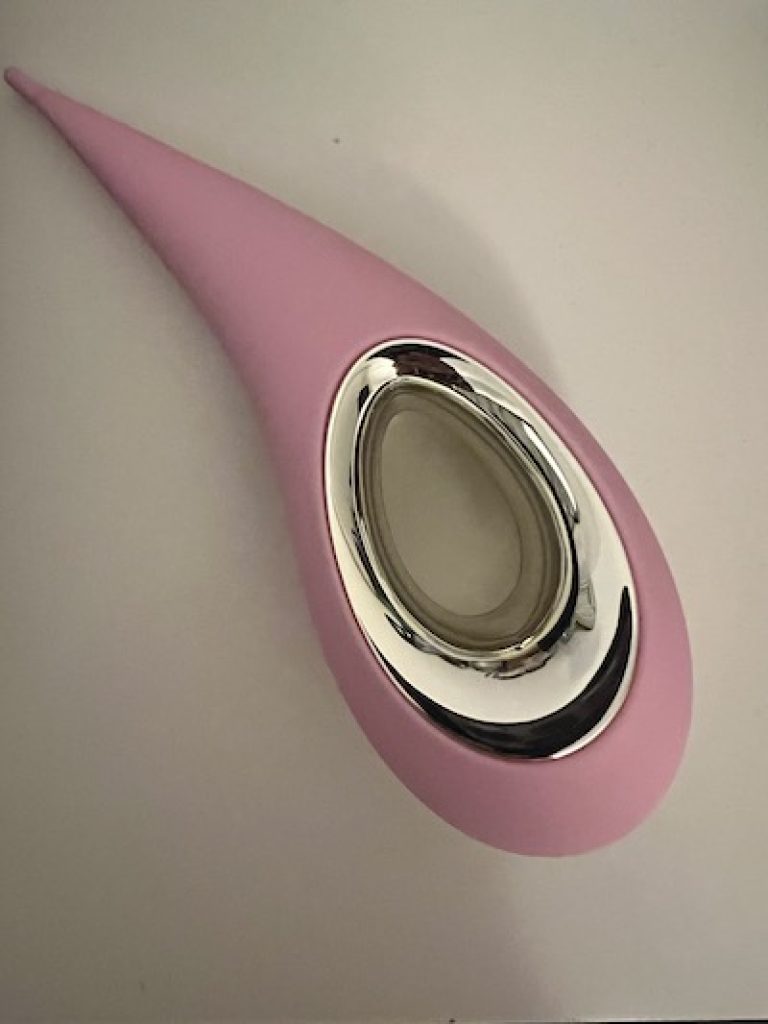 I took my Lelo Dot and gave it a full charge as soon as I received it. This took less than 2 hours so there must have been some charge in it already. I gave it a clean with warm soapy water and got myself comfortable.

Handily, the Lelo Dot came with some personal moisturizer so I rubbed a little on the tip and started it on the first setting.

This was something I loved about the Dot. There was no messing about, I could just press a button and we were off. The first thing I had to work out was how best to hold it, but the hole in the middle of the base meant I had a few options and I ended up going with a bit of whole hand around the base approach.

I maneuvered the tip until it was just touching my clit and the vibrations started to take effect almost immediately. If I had wanted a slow, building orgasm then I could have stayed at this setting for a while, but I was keen to press on so I quickly moved up to setting number 4 (I think).

At this setting I was really starting to enjoy myself and I played around with the position of the tip somewhat. I tried to go for a more diagonal angle of approach and I also applied more pressure. 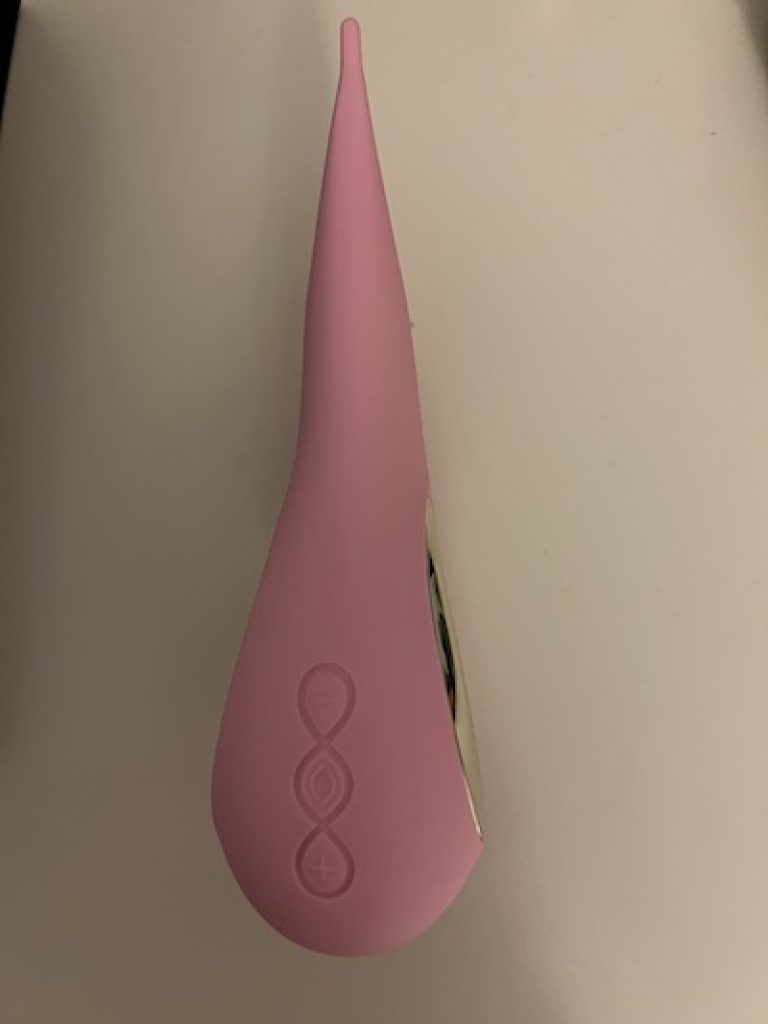 So far so good, and I was only about 90 seconds in. I then decided to go through the settings and find an intensity I was happy with. Both 7 and 8 were ideal but I settled on 7 which really was intense and massively satisfying. I was not wanting to take it slow so I stuck with this setting and came in around 3 minutes all in all.

I decided to carry on and took things all the way up to setting 8 and came a second time. All in all I managed two orgasms in the space of around 6 minutes. The first was explosive and the second was also up there with the best.

The second time I used it I wanted to try it with my hubby so we discussed it, I told him about my experience with it and he was thrilled to give it a go.

We initially played around with it during foreplay – mainly to get him au fait with the controls. He teased me on the neck and down to my breasts and used setting 1 with it on my nipples – this was a pleasant rumbling and something that helped us get in the mood for more.

He proceeded to target my clitoris – again on one of the lowest settings and to be fair to him, he was pretty accurate and did a great job. We then proceeded to intercourse where he continued to control the Lelo Dot.

This was easier for him when I was on top, so we proceeded like that. This felt great by the way. He was enjoying it too.

The trouble was that with our movement it was harder for him to find the accuracy to give me the same feeling I had when playing solo so I offered to use it and he could focus on the intercourse. This was great and he loved watching me control the toy whilst looking at him as I sat on top of him.

What he loved even more was the ease with which I had multiple orgasms.

Some toys get in the way during sex, but the Lelo Dot is genuinely a great addition for couples and I’d recommend it for solo and couple play.

Like most Lelo products, the Dot is not cheap – but like most of their toys, it is a premium product and one that works incredibly well and is well worth the money.

For anyone who has used sex toys before, the Dot will be a very worthy addition to your collection. It offers something different that not many other toys offer and the intensity and number of orgasms that can be achieved with it are great and numerous.

However, if you are new to using vibrators then it may be beneficial to look at one of their other toys first, something like the Gigi 2 or the Smart Wand 2 – as there will be less of a learning curve and then you can come back to the Dot later.

That being said, for solo play, the Dot is very accessible and for couples it is a non-intrusive toy to bring in to the bedroom that will almost certainly bring more pleasure to proceedings.

All in all – I think the Lelo Dot is a triumph and I for one am glad that Lelo focused on a toy that was easy to use but still innovative.